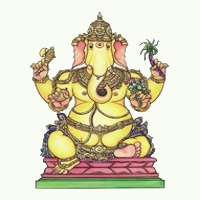 The Golden colored Siddhi Ganapati is the representation of self-mastery and achievement. He is also known as “The Accomplished.” He has four hands, in which he holds a posy of flowers, a mango, a stalk of the sugarcane plant, and a battle ax. His trunk is seen to be curled around a sweet sesame ball. Meaning – The word “Siddhi,” in Sanskrit, means success. Accordingly, Siddhi Ganapati is, as previously stated, regarded as the Lord of success and accomplishment.   He blesses his devotees with success in any path they may be on in life. He is also said to be the one who stores the Ashta Siddhis – the 8 universal attainments. His devotees are blessed with the ability to achieve success in all endeavors of life. As per astrology worshipping Siddhi Ganesh in Ganesh Navratri days helps to achieve new heights in life.
Siddhi Ganapati – Achieve new heights in life
Order Now
DISCLAIMER : request Vedic (Vydic) Yagya Center to perform the above-mentioned Poojas / Yagyas and agree to the above terms. The Yagyas will help to remove negative karma and help to co-create positive future karma. They work by divine power, however, it is important that I make every effort to comply with the instructions received and have faith and continue prayers. I agree that by participating in the Vedic (Vydic) Yagya Center any knowledge gained will not be used as a substitute for health care treatment, programs, or advice normally received from doctors, lawyers, or financial advisors. Vedic (Vydic) Yagya Center does not make any warranties or representations concerning any specific results or effects.