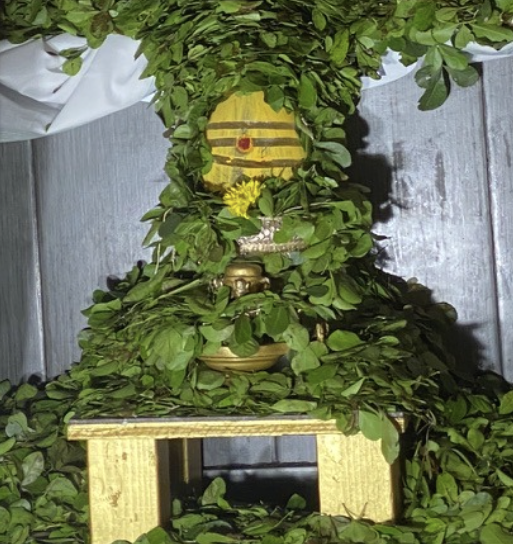 Bilva leaves are trifoliate by nature, resembling a trident, and representing the three gods Brahma (Creator), Vishnu (Preserver), and Shiva (Destroyer), or the three Gunas: Satva, Rajas, and Tamas. According to the ‘Sri Sookta’ these leaves are born from the penance of Goddess Mahalakshmi. Hence these leaves are dearest to Lord Vishnu.

According to the Skanda Purana, the Bilva tree grew from the sweat droplets of Goddess Parvati which fell on the “Mandrachal mountain”. From there the Bilwa tree emerged. She resides as Girija in the roots of the tree, as Maheshwari in its trunk, as Dakshayani in its branches, Parvati in its leaves, Katyayani in its fruit and as Gauri in its flowers. Therefore as Parvati resides in Her various forms in this tree, Shiva is extremely fond of its leaves. It is a symbol of Shiva. Offering one bilva leaf is equivalent to offering a 1000 lotuses, says the Siva Purana.

I offer one leaf of Bilwa to Lord Shiva, As seeing and touching of a tree of Bilwa,
Washes away ones sins and also very great sins.

Laksha Bilwarchana
offer one leaf of Bilwa to Lord Shiva, As seeing and touching of a tree of Bilwa, Washes away ones sins and also very great sins
Order Now
DISCLAIMER : request Vedic (Vydic) Yagya Center to perform the above-mentioned Poojas / Yagyas and agree to the above terms. The Yagyas will help to remove negative karma and help to co-create positive future karma. They work by divine power, however, it is important that I make every effort to comply with the instructions received and have faith and continue prayers. I agree that by participating in the Vedic (Vydic) Yagya Center any knowledge gained will not be used as a substitute for health care treatment, programs, or advice normally received from doctors, lawyers, or financial advisors. Vedic (Vydic) Yagya Center does not make any warranties or representations concerning any specific results or effects.