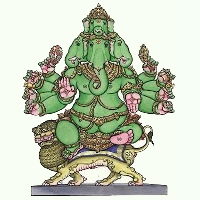 Heramba Ganapati is usually depicted as being white in color, and he is seen to be riding a giant lion as his vehicle. He is the beloved son and appears with 10 hands and 5 heads. His right hand bestows blessings (Abhya Mudra), and his left-hand grants wishes. The rest of the hands hold a mala of beads (Rudraksha), a noose, an ax, a hammer, a broken tusk, a fruit, a Modaka (his favorite sweet), and a garland. Meaning – The term “Heramba,” in Sanskrit, is actually made up of two separate words. The word “He” is defined as “weakness” or “helplessness.” The word “Ramba” is defined as “protection.” Thus, Heramab Ganapati is known as the protector of the weak and/or helpless. This form of Lord Ganesha holds a protective role of a savior. He annihilates fear and worshiping Him is said to bring confidence to the weak and hope to the poor. His devotees are rid of anxiety, and blessed with skill, knowledge, and conviction. As per astrology worshipping Heramba Ganesh in Ganesh Navratri days helps to protect from weakness and helplessness.
Heramba Ganapati – Achieve strength, get rid of fear, weakness
Order Now
DISCLAIMER : request Vedic (Vydic) Yagya Center to perform the above-mentioned Poojas / Yagyas and agree to the above terms. The Yagyas will help to remove negative karma and help to co-create positive future karma. They work by divine power, however, it is important that I make every effort to comply with the instructions received and have faith and continue prayers. I agree that by participating in the Vedic (Vydic) Yagya Center any knowledge gained will not be used as a substitute for health care treatment, programs, or advice normally received from doctors, lawyers, or financial advisors. Vedic (Vydic) Yagya Center does not make any warranties or representations concerning any specific results or effects.