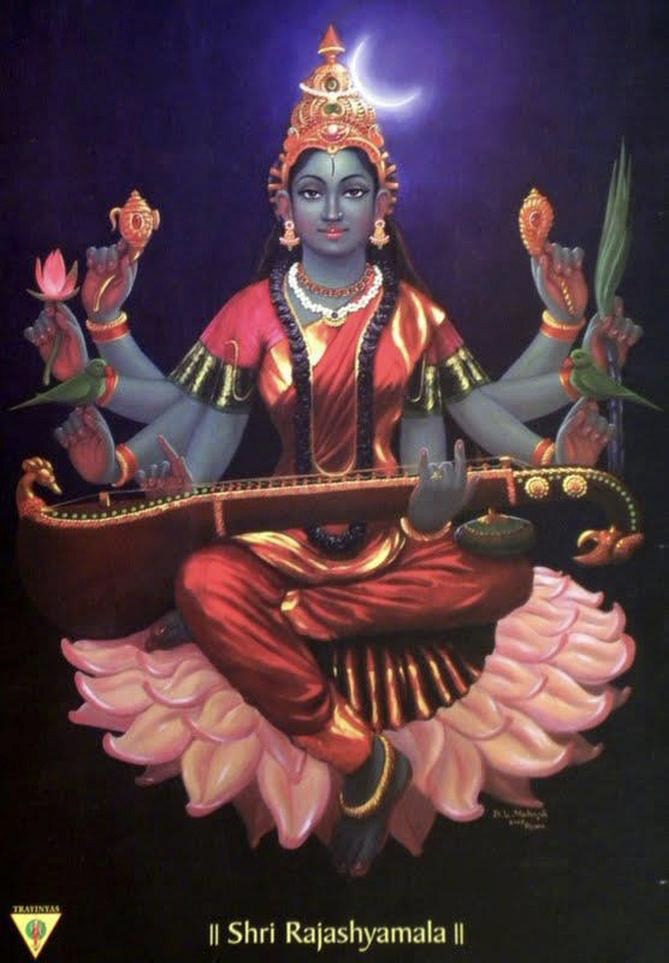 The nine divine nights of Navratri, which are dedicated to the goddess Durga, are the most auspicious time of the year in the Vedic tradition.  Goddess Mother Divine (shakti) is the decorated and celebrated in 9 different forms on each day of Navratri representing the celebration of feminine power. Navratri is celebrated four time per year, corresponding with the seasons. The Vedic calendar is as follows:

What Is Shyamala Navratri?

Like other Navratris, Shyamala Navratri also entails the divine nine nights to honor and celebrate the female shakti in in the form of Goddess Shyamala or Matangi. Shyamala Navratri is celebrated during the month of Magha (Jan-Feb) which starts after Amavasya day and continues for 9 days from Prathama to Navami. This Shyamala Navratri includes Vasanta Panchami (day 5) Radha Saptami (Lord Sun’s Birthday (day 7)), and Beshmashtami (day 8).  These are special days during these Navaratri.

Who Is Goddess Shyamala Devi?

Shyamala Devi or Goddess Shyamala is also known as Devi Matangi, Raja Matangi, Sri Raja Shyamala, or Maha Mantirini.  She is the 9th among 10 Dasa Mahavidyas (the 10 tantric divine forms of the Divine Mother). Shyamala Devi is believed to have originated from the sugarcane bow of goddess Sri Lalitha Tripura Sundari.

Shyamala Devi is the 9th Vaaghdevi and as the Veda Mata, she is represented as Adhi Devata. Matangi is the Maha Mantiri and adviser of Sri Lalitha Parameswari and the prime Mantri who wears the royal crest  and is known as Mantreswari.

Shyamala Devi or Goddess Matangi has a dark, emerald-green complexion with 8 hands holding the weapons: a noose, sword, goad, and club,along with a floral garland of white lotuses and kadamba flowers (hence called as KadambaVanaVasini), and 2 parrots. She is seen playing a Ruby stoned veena, wearing conch-shell earrings and wears a crescent moon as her crown while seated on the royal throne. Each of these items has a special meaning: The color green – knowledge; Veena – music; Parrot – speech; Floral bow- Art and success; Paasaam- Attractiveness; Ankusham- Control; Sugarcane- worldly desires.

Goddess Shyamala Devi is the 9th Vaaghdevi and hence provides her devotees with blessings to create a Prosperity.

By worshipping Maa Shyamala Devi during the “Shyamala Navaratri” days in Maagha Masam humankind will be relieved from all sorts of troubles, pains and agony caused by Navagraha dosha and other natural calamities. Included are pandemics such as COVID.

With the divine blessings of Maa Shyamala, students pursuing various course will prosper in their studies, employees will receive raises at work both financial and in status, businessmen will reap the benefits of flourishing business as they progress free from all hurdles. The long-sought goals of humanity at large will be realized. The divine intervention of the Maa Shyamala restores peace and prosperity throughout the Universe.

DISCLAIMER : request Vedic (Vydic) Yagya Center to perform the above-mentioned Poojas / Yagyas and agree to the above terms. The Yagyas will help to remove negative karma and help to co-create positive future karma. They work by divine power, however, it is important that I make every effort to comply with the instructions received and have faith and continue prayers. I agree that by participating in the Vedic (Vydic) Yagya Center any knowledge gained will not be used as a substitute for health care treatment, programs, or advice normally received from doctors, lawyers, or financial advisors. Vedic (Vydic) Yagya Center does not make any warranties or representations concerning any specific results or effects.