The Vedic Yagya Center is the place for Vedic remedies and Yagyas. We have been providing our services around the globe for over two decades. These services include remedies of many different levels for anyone who needs it, and they have provided positive results across the board. These remedies are provided after carefully considering the clients’ Vedic Astrological Natal Charts.

Vedic Yagya Center was founded in 2002 by Pandit Sharma C.S. Samavedula, a 6th generation Sama Veda pandit, who has been performing Vedic Yagyas for clients throughout the world for over 20 years. All of our Yagya services are carefully reviewed and supervised by Pundit Samavedula. Under his supervision, we are able to provide the best services and pave the path for the Yagyas (remedies) to leave a positive impact on your life.

The Center offers the most authentic and effective traditional Vedic Yagyas, Homas, and poojas as prescribed in the Vedas and Shastras to individuals, organizations, and businesses. Sound vibrations of specific Sanskrit mantras (chants) during these performances alleviate many problems of our modern times.

We have locations in India in Vijayawada, Andhra Pradesh (close to the Holy Krishna River and Divine Mother Kanaka Durga Temple), and Varanasi (Kashi), Uttar Pradesh (Jyotirlinga, the abode of Lord Shiva), and in the U.S.A in , California. We employ a core group of over 20 Vedic Pandits representing all 4 branches of the Vedas, who are experts in different kinds of Yagyas, Homas, and Pujas. These include Sri Vidya Navavarana Pujas, Maha Vidya Homas, Surya Upasana, and Maha Chandi Yagyas.

Center is organized along these specialties: Health, Business, etc. For larger Yagyas, which can have as many as 100 to 150 pandits, the Center has contracts with other expert Vedic pandits. All pandits working through the Center begin their day with meditation, followed by the performance of the Rudrabhishekam, and then go to their allotted Yagyas for different sponsors. In the Center, all Yagyas are performed exclusively for people who request them. 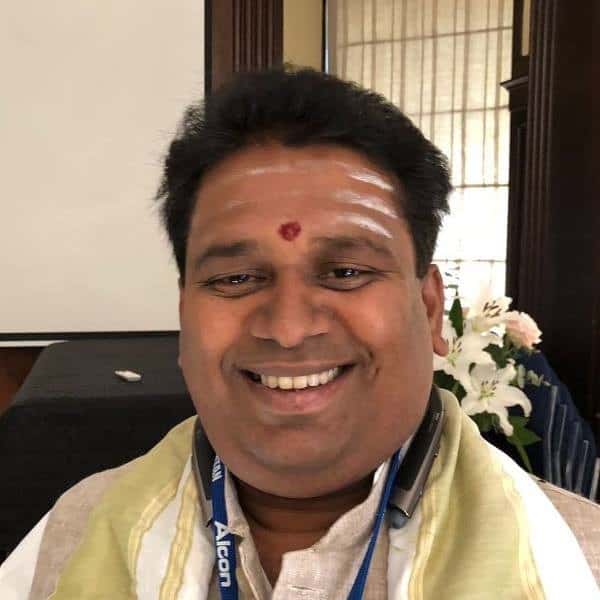 Pandit Sharma C.S. Samavedula is the founder of the Vedic Yagya Center. He was initiated into the Sri Vidya tradition by his father, the late Brahma Sri Samavedula Trinadha Lakshmi Narasimha Murty (a world-renowned Sri Vidyopasaka).

Pandit Sharma is a 6th generation Sama Veda pandit and is also a Sri Vidyopasaka. He began his training in the Vedas at age 7, and started under the guidance of his paternal grandfather, the late Brahma Sri Samavedula Narayana Shastri, a renowned Sama Veda Pandit awarded by the President of India. He then continued his studies with his maternal grandfather, the late Brahma Sri Samavedula Ramagopala Shastri at Shri Sarva Raya Veda Patha Shala, a pandit training school in Andhra Pradesh, India. Then, for further studies, he went to Varanasi (Kashi) to study under the guidance of the late Brahma Sri Shankara Narayana Shrauti Gal.

In 1990, after 12 years of study, Pandit Sharma received his master’s degree in Vedic Studies, and this degree was evaluated and authenticated at the University of Toronto by Prof. Venkatacharya, who is the Dean of the Chair of Hinduism Vedic Studies. During this time, he was trained into Vedic remedial and astrological studies as well. In addition, he completed his secular studies through the 12th grade.

From 1990 to 1991, Pandit Sharma studied the Ashta Brahmana and Grihya Sutras with the late Shri Shankar Shrauti Gal, who was a professor (Acharya) at the Veda Mimansa Anusandhana Kendra school in Varanasi, Uttar Pradesh, India.

From 1991 to 1995, Pandit Sharma was a professor (Acharya) of Sama Veda at Maharishi Veda Vigyana Vishwa Vidya Peeth (Maharishi Vedic University), a charitable trust that trains Vedic Pandits throughout India.

From 1995 through 2002, he was a Vedic priest at various Temples throughout the US and Canada. In 2001, Pandit Sharma served as the officiating chief priest at the Maharudra yagya in Atlanta, Georgia, which was performed by 50 Vedic Pandits.

In 2002, Pandit Sharma founded the Vedic Yagya Center in the USA. He has also assisted in the founding, organizing, fundraising, and building of other temples in North America, including the Austin Hindu Temple, in South Austin, Texas, and Sri Venkateswara Temple and Shirdi Sai Temple in North Austin, Texas. He performed several Kumbhabhishekams for several temples throughout the globe. He also founded the Sri Devi Mandir (Maanavata Mandir) in Fairfield, Iowa, and the Sri Sivakameswari Temple in Costa Mesa, California, where he currently serves as the head Vedic priest and founder.

With the blessings of his parents and his grandfathers, and with divine intervention, in 2002 he founded a Vedic School in South India (Vydic Foundation of India), where aspiring Vedic Pandits are trained and the Vedic tradition is preserved along with the ancient language, Sanskrit.

In 2016, Pandit Sharma was the chief priest and led the Maha Yagya in Japan in front of Mount Fuji. This Yagya was organized by Her Holiness, Sai Maa.

In 2019, he started another branch of the Vedic School in Varanasi, in addition to the South India School, where all Vedic Remedies are performed.

DISCLAIMER : request Vedic (Vydic) Yagya Center to perform the above-mentioned Poojas / Yagyas and agree to the above terms. The Yagyas will help to remove negative karma and help to co-create positive future karma. They work by divine power, however, it is important that I make every effort to comply with the instructions received and have faith and continue prayers. I agree that by participating in the Vedic (Vydic) Yagya Center any knowledge gained will not be used as a substitute for health care treatment, programs, or advice normally received from doctors, lawyers, or financial advisors. Vedic (Vydic) Yagya Center does not make any warranties or representations concerning any specific results or effects.